Viewers can perform the search by:

1. Enter the searched words on the Search Bar then press the BLUE button (searching like in Google)

2. The searched words can be Vietnamese or in non-accent way: (eg: to search the word "công quả", viewers can enter "công quả" (with vietnamese accents) or "cong qua" or "CONG QUA" or "Cong Qua" (no qoute, double-quote or hyphen is required such as "cong-qua" or "CONG-QUA" .. .)

3. During reading, if come across the words that required to look further, viewers can highlight that words then press ENTER key, the searched result will be showed in new page if found in database, this way is quicker than cut and paste into the Search Bar then press ENTER key. 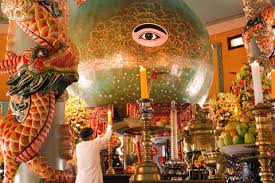 "Bính, I assign you to make the Universe Sphere. Do you understand? (Laughing) A globe like the earth. Got that? It should be 3.333 meters in diameter . I know it is too big! It should be that big though because it contains magic power.  Paint it sky-blue. Paint stars and the constellation Ursa Major. There are thirty six heavens and four Great Continents in the space, which are not stars. The other seventy two Earths and three thousand Worlds are stars. They are 3,072 stars in total. You should have them all painted. Consult Western Astronomy Books. On the constellation Ursa Major, paint the two ship rudders ( the Big Dipper and the Little Dipper) and the North Star. Paint the Divine Eye on the North Star. Understood? The sphere had better be made of glass, in which a lamp always lights. That is an invaluable prayer for humans. However, just do whatever you can if it is too late for the convention."

History of the Universal Sphere in Tây Ninh Temple.

In 1941, the French Government imprisoned Hộ Pháp, seized the Temple, destroyed the sphere and threw the Divine Eye out. Some followers picked it up and put it away.

When the French government was overthrown by the Japanese, followers renovated the Temple and made another sphere with the old Divine Eye.

On August 30th 1946, the French Government released Hộ Pháp. The Temple was renovated again. Another sphere was made this time, but then broke a little later. On January 29th 1964, what is now the Universe Sphere was put on the Temple Altar. The only thing that has still been used  is the original Divine Eye, which is believed to be painted by Thượng Phẩm.